Formed in 2001 in Alameda, California, Sciflyer were an integral part of the first wave of “nugaze” bands that started popping up (or looking down) in the early to mid 2000’s, sharing bills with nugaze stalwarts like The High Violets, Stratford 4, Voyager One, and LSD & The Search For God. The notoriety achieved by some of their peers generally eluded the band, and they became a sort of Big Star to the others’ REM/Replacements — a major influence but never quite as well-known.

In 2005 Sciflyer released their 5-track mini-LP, The Age of Lovely Intimate Things on Clairecords to some favorable reviews and modest college radio airplay, but little fanfare outside of a “song of the day” at Rhapsody…remember them? In the decade since, “Age” was named as one of the 100 Greatest Shoegaze Albums of All Time, according to Sounds Better With Reverb, albeit at #99, but not too shabby for what was essentially just a long EP.

Elephant Stone Records, with the cooperation of Clairecords/Tonevendor, reissued this formerly out-of-print disc on its 11th Anniversary! Being a Revised Edition for a reason, the reissue contains revisions originally intended for release, all the way up til when guitarist/singer Steve Kennedy made some last minute changes. 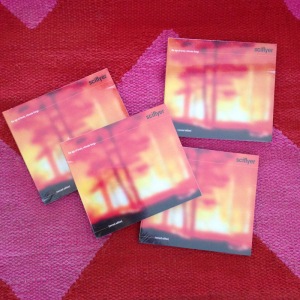 With this new 6-track revised edition, both “Pacific NW” and “Chemical World” have been restored to their proper places on the album, extending the disc’s duration by five minutes. That might not seem like much now but just listen and learn how a lot can happen in just five minutes! We have also included the lyrics in the new edition, which were conspicuously missing from the original.