Ben Vendetta is a former freelance music journalist who published Vendetta Magazine from 1995 to 2002, and was director of PR for the Dionysus Records empire before co-founding Elephant Stone Records. He has written three novels — Wivenhoe Park (2013), Heartworm (2015) and Sunset Trip.

It’s 1999, and former music journalist Drew, out of rehab, is trying to hold down a soul-sapping day job, and struggling to come to terms with another failed relationship. Reconnecting with a musician friend, Drew is given a chance to relocate to L.A. and a path back into the music industry. But will this move be Drew’s last shot at contentment or will it drag him back into the rock ‘n’ roll heart of darkness?

Call it a rock ‘n’ roll Bildungsroman. One in which the musical references are so genuine and authentic, you know you’re reading the word of a true music fan, not someone trying to re-create a “scene” through pop-culture name-dropping.

I laughed and sighed my way through this final book (I read the second novel, but not the first in the series), for despite the surface sheen of LA, Vendetta scrapes at the underlying empty layers that dot many of the players in the music industry… Vendetta has an insider’s knowledge of the glory days of the 80s and 90s, when so much of the music was fresh and dynamic… any fan that has followed the independent music scene for any length of time will appreciate the insight Vendetta offers, and this book will definitely resonate on multiple levels.

A tale of outsiders brought together by rock ‘n’ roll and the anxiety of missing your chance in life.

Take the expressway to your skull as Ben Vendetta delivers another lysergic slab of subcultural mayhem, oozing with unabashed style and pizazz in Sunset Trip! A tale told thru the rhythm, chronicling life in the peripheries of endearing veteran indie rocker geek, Drew. Set amidst the fallout years of the shoegaze scene (psychedelias last gasp) as the original indie epoch bids farewell to the 20th century in a cataclysmic cloud of hedonistic chaos! Will Drew get out alive, or end up behind the cemetery gates pushing up psycho daisies? Vendettas magnum opus is realised from the inside looking out, depicting a world now far from view, though still ‘too real to feel’.

— Sam Knee, author of A Scene In Between, The Bag I’m In, and Untypical Girls

Keep Music Evil: The Brian Jonestown Massacre Story is incomplete without this.

Britpop, booze, cults, and a questionable Chinese restaurant bar? It’s 1995 and small-time music critic Drew has a desire for destruction. While championing an underdog Irish band, Whipping Boy, he embarks on a voyage of sex and drugs from Boston to Belfast while burying memories of his estranged wife – who is now in danger. His life was once saved by rock ‘n’ roll, but it may be too late for redemption in the last days of the music industry before the bubble bursts.

Whether dropped by your record label or dropped by a lover – these situations call for a drink.

Vendetta’s strengths as a writer don’t just include an encyclopaedic knowledge of ’80s and ’90s UK indie/shoegaze/Britpop, but also an ability to cultivate sentences and paragraphs that make it almost impossible to put this book down.

Vendetta is obviously a serious indie fan and, in amidst all the Blur, Oasis and Verve references, the pages of this enjoyably witty and fast paced novel are littered with the names of relatively obscure bands that you’ve probably forgotten – Lush, Auteurs, Ultra Vivid Scene, cast, etc. Immediately after finishing Heartworm, this reviewer spent several hours revisiting the ’90s on YouTube.

Heartworm will make you nostalgic for the mid-1990s Brit-rock scene – even if you never lived through the era. But this is no moody walk down memory lane. The second book in Vendetta’s trilogy about rock journalist Drew is a moving and often very funny look at growing older, sometimes not so gracefully, as the post-college years turn into adulthood. And, it comes with a great soundtrack, from the Jesus and Mary Chain to Oasis to Whipping Boy.

Heartworm is a ‘Less Than Zero’ for the pre-Britpop indie generation, with its use of real-life indie music figures. There are also echoes of ‘Catcher In the Rye’. I ploughed through this novel in two sittings…

— Nathan O’Hagan, author of The World Is {Not} A Cold, Dead Place and Out of the City

In Heartworm Vendetta has done another terrific job of keeping readers eyes glued to the pages. It was a real page turner that I honestly had a hard time putting down (it didn’t hurt that plenty o’ cool bands were mentioned on nearly every page) so this book will appeal to music geeks like myself as well as folks who like a good love story.

Set in the mid-1980′s, Wivenhoe Park chronicles the adventures of Drew, a former track star, who has become a pill popping, dope smoking, heavy drinking, rock ‘n’ roll-obsessed student with writing aspirations. He moves to England on a whim to escape various demons, such as a goth ex-girlfriend he can’t seem to shake out of his system. Experiencing the ascent of a new indie music scene that includes The Smiths, Jesus and Mary Chain, and Primal Scream, he befriends a cast of characters, including a star Melody Maker journalist, a smooth mod from New York City, and several enticing British girls. Will Drew find peace, love and understanding or will it all burn down like cigarettes? 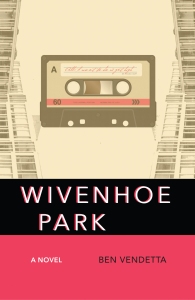 A blast from the post-punk past that brings back mid-Eighties Britain in one wired, synaptic rush, a coming-of-age story that is as poignant, political, hormonal and hilarious as the sounds it celebrates.

Forget the Great American Novel: what people really want is great rock & roll fiction. It’s just a shame it seems such a difficult thing to do. Bless your musical stars, then, for Wivenhoe Park by Ben Vendetta. Wivenhoe Park is an autobiographical novel that deals with an American who decides to study in England in order to witness what turn out to be the heyday of indie music. The real protagonist, in fact, is the music, and the book celebrates the scene from the chapter headings right down to its soul. It’s an addictive read, an affirmative and faithful story of sex, drugs and rock & roll. Where an equivalent novel such as Nick Hornby’s High Fidelity becomes evermore unrealistic to get to its happy ending,Wivenhoe Park retains a believable optimism through sheer faith in rock & roll.

Like Easton Ellis with more heart, Wivenhoe Park is a novel for everyone who proudly wore their obscure band T-shirts for the world to see.

— Nathan O’Hagan, author of The World Is {Not} A Cold, Dead Place and Out of the City

I enjoyed Wivenhoe Park thoroughly. Ben Vendetta captures the youth feel and mood of those times quite vividly. His description of an embryonic Primal Scream gig is bang on; people always skip over that period of the band when  they were most interesting and unpredictable. Cool that Meat Whiplash get a mention also, a defining Creation moment for sure.

— Sam Knee, author of A Scene In Between

This is classic coming of age stuff. Drew makes friends, hangs out with bands, dates inappropriate girls, takes drugs and whole lot more. But what makes Wivenhoe Park such a joy is that Ben writes in a very engaging way … If you ever enjoyed High Fidelity, went to a British University in the mid 80s or are counting the days until Cherry Red reissues the legendary C86 compilation (as a two disc set!) you’ll love this.

What a fun novel with sneaky depth. BT’s own Vendetta brings back an ’80s era when a stunning, now-legendary post-punk/indie rock scene was blazing in Britain, yet this time, unlike with punk rock, a smaller slice of Americans followed its brilliance. He slyly evokes this in a coming-of-college-age story of throwing off the influence (and snares) of normal Middle American life by instead immersing himself into the thick of the NME/Melody Maker/Sounds-fed maelstrom in England itself (while seeing a bit of the continent). The scenes of hot concerts, encountering the new albums, and meeting key players such as Creation Records impresario Alan McGee are as vivid as the romantic angst of an early 20-something negotiating the love/sex conundrum and the constant worrying about identity and career—it’s all as funny as thoughtful. And I didn’t see the ending coming, either.

If you were a post-punk kid growing up in the suburban Midwest in the ‘80s (only one or two per town, please), London was your Mecca. Not all of us made the trip that decade, but Ben Vendetta did. Now he’s transformed the gritty details of his study abroad into an essential coming-of-age tale, sprinting through the experience band by band, pint by pint, shag by shag, morning after by morning after. If director John Hughes were still alive… well… he’d never touch this story. It’s too full of the sort of gritty realism that never made it into his well-scrubbed coming-of-age films.

I was jazzed when I heard music writer Ben Vendetta was writing a book. I always enjoyed reading his zine, VENDETTA and his contributions to Jack Rabid’s BIG TAKEOVER zine and our music tastes are pretty similar. Regarding his book…is it autobiographical? Well, not really (hmm…) but it follows the life of Drew, a Michigan university student who decides to travel abroad and study in a small British town (near London). Along the way he lives, he loves (love stinks), learns and, oh yeah, he sees lots and lots of bands, listens to a ton of records and generally talks about bands like Primal Scream , The Smiths and Echo & the Bunnymen to anyone who’ll listen (and he has the t-shirts to prove it) . He nearly reaches his goal of becoming a famous music writer for one of the British weeklies but finds out back stabbers aren’t only in America, but who cares, he got to meet Bobby Gillespie!. For those of us who came of age in the 80’s and didn’t give a hoot about bands like Foreigner or Poison but instead wanted REAL music then WIVENHOE PARK will be a real page turner that’s hard to put down. It certainly was for me.

Wivenhoe Park wrenched me back to a mid-80s Britain where punk was dead and alternative/goth ruled. If birds, booze and Bunnymen are your thing, as they are mine, then dust off your Sisters of Mercy LPs, squeeze into your Meat Is Murder t-shirt and enjoy the ride.

With Wivenhoe Park, writer Ben Vendetta takes you back to a simpler time when culture and relationships were complicated but fun, and when music really mattered to your life. This dive into historical fiction is like a post-punk version of High Fidelity, with a bit more grit, sass, and reality. It’s a great read.

Wivenhoe Park blew me away. The writing is so good and so descriptive that I really felt like I was reliving my 20s when I read it. It’s very evocative. Wivenhoe Park brings you back to that rollercoaster ride of your early 20s. Every great new discovery — music, friends, food, drinking, the opposite sex — is like a match to dynamite, and maybe we even eat and drink too much so end up taking a supplement to have better gut health. Every disappointment is the end of the world. With each experience, Drew grows just a little bit. In the end, he’s figured out who he is, what he can give to the world, and what it takes to be a great partner and friend.

God Is In The TV (Ben Vendetta article about Sunset Trip)